Blocks are the basis of all of Starship EVO. They are used to construct the hull of a ship or station, generate power, move entities, travel across the universe, and fling balls of damage at significant fractions of the speed of light toward people or things you don't want around anymore. Comes in three sizes - Extra Large Blocks (16x16), Large Blocks (4x4), and Small Blocks (aka Bricks) (1x1).

The System Blocks shown in the codex

System Blocks allow ships and stations, basically, to work. They include:

The Weapon Blocks displayed in the Codex

Weapon Blocks are used in the construction of the core weapon systems of turrets and spinal cannons. They include:

And are used alongside a variety of Attachments to augment their function to fulfill a variety of roles and increase their efficiency, which include:

The Hull Blocks Pictured in the Codex

Hull Blocks are used to construct the hull of larger ships. They absorb heat, provide armor & health to the ship, and look real cool doing it.

The Mechanism Blocks shown in the Codex

Mechanism blocks are used to assemble mechanisms to move child entities on a parent. They include:

The Logic Blocks displayed in the Codex

An integral part of the game that allows the control of all the ship systems & mechanisms here on this page. They include:

The Interior Blocks shown in the Codex 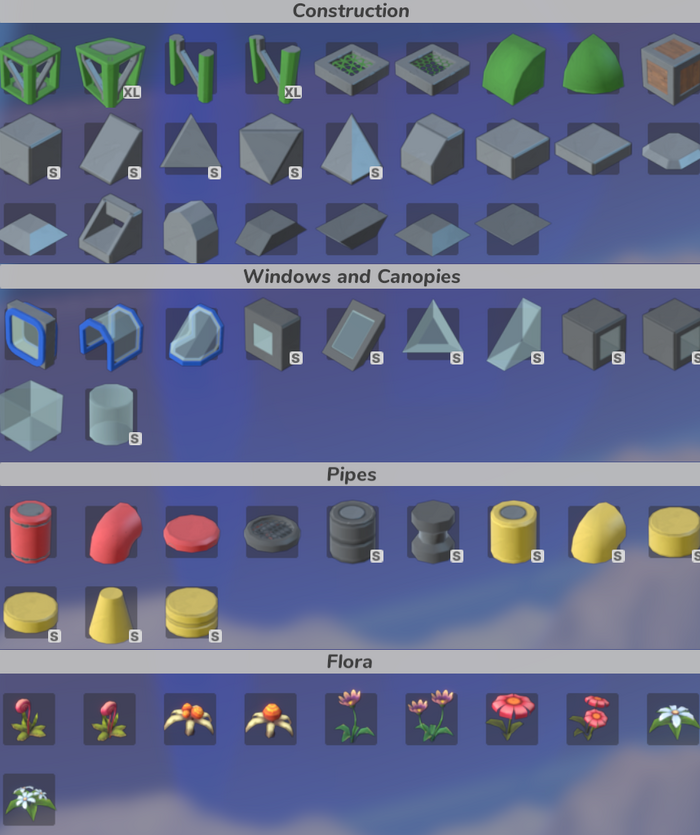 The Decorative Blocks and Bricks in the Codex

A variety of full sized blocks, bricks, and really big blocks for decoration and construction of ships and stations. Purely decorative, although they still retain the same properties as their block/brick counterparts, so the only downside comes from not using them. They look real sick.[1]

The "window and canopy" blocks are used for making windows in ships, clear decorations, canopies, and cockpit windows.

The "pipe" blocks are brick and block sized pipe looking things that are colorable and scalable. Great for pretty much anything you could imagine.

The "flora" blocks are well, plants. They can be placed anywhere, and are great decoration in fancy ship and station living areas. Might need pots or soil sometime in the future.